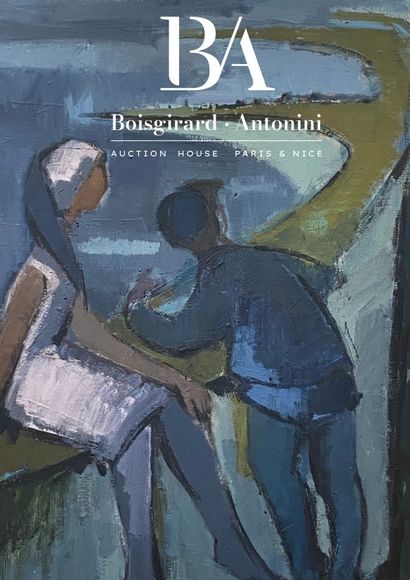 THANK YOU TO MAKE AN APPOINTMENT BEFORE COMING TO SEE THE LOTS AT THE OFFICE:

Please make an appointment before coming to pick up your lots at 0147708136 or by email at contact@ba-paris.com

Elisabeth Hahn was born in Dortmund, Germany, where she began her artistic studies.

In 1953, she moved to Paris. She continued her studies at the Beaux-Arts in the studios of Jean Souverbie and Edmond Heuzé, between 1954 and 1959.

She also exhibits regularly in Germany, including in Dortmund and Königswinter-Oberpleis.

In her paintings, of figurative tendency, she always tries to put the color and the line at the service of the subject, eliminating all the details, which could be harmful to the overall expression. Elisabeth Hahn's painting fully deserves to be rediscovered.

Painter active in France in the second half of the XXth century, he was a friend of Elisabeth Hahn and shared her studio for several years.

We use cookies to provide you with a better browsing experience, perform site traffic analysis, and deliver content and advertisements most relevant to your interests.

By allowing these cookies, you agree to the deposit, reading and use of tracking technologies necessary for their proper functioning. Read more about our privacy policy.